Jack’s Touch (aka “Jet”) made her belated debut for the yard in a 2 mile 4 furlong maiden hurdle at Market Rasen on a very wet 17 November. She had been off, as a result of a minor injury last Autumn, since finishing second in a maiden hurdle at Fairyhouse in March 2021. Her owners have been very understanding and patient and we were all pleased to see her racing at last! Aidan Coleman gave her a lovely ride, biding his time on the very soft ground. Turning for home he brought her into the race, moving up from 5th to take the lead briefly just before the second last flight. Although she was then headed and baulked, she stayed on really well to retake 2nd from the well-fancied favourite. She was closing on the winner and, with another 100 yards, could well have won. She showed excellent character and determination and got the trip well and it was a very pleasing run, particularly after such a long lay-off. The Racing Post selected Jet as the “Eyecatcher” of the meeting. The photograph of Jet cantering to the start is courtesy of Steven Cargill.

Glory (Gloire d’Athon) was meant to run for his hat-trick later on the same card but the torrential rain, and flooding on the course, forced racing to be abandoned. The photographs below give some idea of the weather! 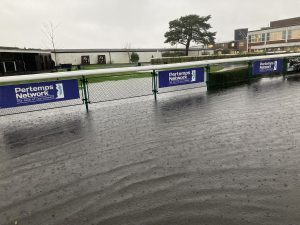 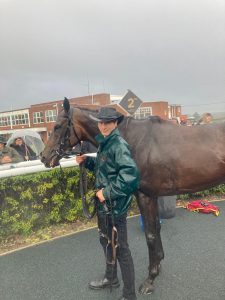