Glimpse of Gold won his third race since his debut for the yard and for Yen Hall Racing last September. He was sent off at 18/1 but demonstrated real character and determination to beat the even money favourite on the line. Gold, ridden again by Alex Thorne, set off at a blistering pace and led from the start until headed by the favourite at the second last hurdle. Gold fought back and the two horses were upsides taking the final obstacle and had a great battle to the line with Gold stretching out his neck with every stride in his determination not to be beaten. It was the fastest race of the day (other than the bumper) and the only race to be quicker than standard. Gold has now run over hurdles 7 times for Yen Hall Farm Racing, winning three and being placed on all the others except on one occasion when the ground was softer than he likes. Not bad for a 10 year old!

Here is a great photograph courtesy of Adrian Judd of www.leaderboardphotography.com who also supplied the photograph at the top of this post. 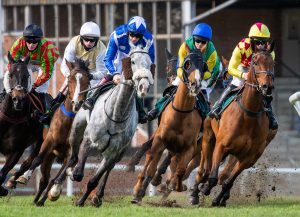